Last Monday, March, 10th, Dr. Neal Gafter gave a talk for the Java User Group Cologne ... and it was an awesome one .. to be correct, it was more than one talk. But let's start at the beginning. I met Neal at noon at the central station in Cologne and we did some sightseeing through Cologne. We were in the Colgone Dom, its treasure room, went to the Rhine, through the old town, I did show him some remaining parts of the past city wall .. actually it was a still existing gate to the city.

Later on we met Ann Oreshnikova, marketing director from JetBrains. We had some further hours of fun together in the city. We went to different breweries, the Früh and the Päffgen, had some local beers and local food .. before going to the event location at about 6 pm. There everything was set up nicely again as always .. with a nice Kölsch buffet (buffet with food and drinks typical for Cologne).

At 7 pm the rooms were full .. about 90 persons attended Neal's first talk in Germany. Neal gave his 60-minutes talk about JDK 7 Language changes .. explaining what should be done in the JDK and why .. he pointed out that it is important to do some cleaning up in the JDK with the coming release e.g. in the area of Generics and Switch Statements. More long-term with a target release of JDK 8 he sees some more features in the language to evolve it naturally -- especially Closures. Closures are pretty easy to use, he said, are transparent for the developer and are not really rocket science .. many other languages have them already and for a long time.

Neal pointed out that "reading" is much more important than "writing" .. you write code once, but you read it very often. So the code must be easy to understand.

After about 60 minutes he was done and answered many questions ... the plan was to postpone all questions to later at the evening .. but there was so much hot reaction .. so we did a Q&A part. 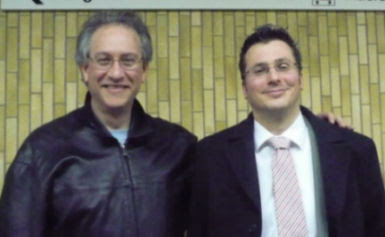 After a 10 minutes break then Ann presented some Javascript puzzlers to the audience. Very, very interesting what is possible in this area and seeing some pitfalls! After that Neal asked the audience what they wanted to hear next. :-) He took his Closures talk out of his bag and gave it completely. Afterwards and in between he answered many, many questions and very interesting discussions arised about Java, Groovy and 10000 topics.

We then distributed five IntelliJ IDEA full-licenses to lucky winners and over a hand full of O'Reilly books while doing a raffle. It was clearly after midnight (!) we were done with this "official" part of the show. We then went down to a bar beside for some further beer.

The event itself lasted over five hours -- many thanks to Neal for coming to Cologne for this great show, your absolutely outstanding performance and your time. I personally learned a lot .. also some non-technical stuff e.g. about the working conditions at Google. I knew some facts before, what I did not know was: employee reviews and ratings are done only by peers!! The manager does not have any influence on that. Isn't that great!?! I'm a supporter of agile disciplines but I very often ask myself in projects .. "Why is this called agile here"? It is about selling an "agile" product very often without understanding the core facets of collaboration being in competition with peers. Walking Google's way you have to help your peers, be polite without any vanity fair, accelerating information exchange ... Many projects should do that .. in regular, short intervals.

Thanks again to Neal and to Ann for your time.

Neil is a great speaker and the entire event was really great, I enjoyed most of it.

The chairs were not that great to sit on for five hours, and I got all sleepy while lights were out during Neil's first talk. Thankfuly noone bothered to switch them off again later on.

Getting to win the Groovy book after all that (implicit) bashing on Groovy from Neil was a bit ironic, but still nice. I read the chapter on closures while waiting for my train.

Ann's presentation was good, too. I've learned and wrote quite a bit of JavaScript over the last two years, but didn't know about the falls of comparing strings and numbers. Luckily, while the behaviour may be very weird, usually its never a problem, it just works as intended.

Looking forward to the next event!

Agreed, the evening and Neil were pretty darn great! I really enjoyed it.

Oh, and I also wrote a (German) blog entry about it myself. In case you want to check it out, it is here: http://www.hobsoft.de/index_files/neal-gafter-at-jugc.html

seems that you had some great time! Lucky you Master Mike!

great that you liked it.

@Jörn: yes, the setting is not best for such a marathon session .. it is not like a cinema ;-) .. but who could expect that it will take over five hours!! :-) On the other hand, I was impressed about the atmosphere and the general suspense over the whole time. Almost no one wanted to miss only one second of the talk(s). Myself I aerated myself while walking around, to the buffet and speaking to some other guys also during the sessions. This helps. But possibly it did also depend on the fact that we had fresh beer on tap. ;-)

This momentousdecree wow gold came as a great beacon gold in wow light of hope buy wow gold to millions of negroslaves wow gold kaufen who had been seared in the flames of withering injustice.maplestory mesos it came as a joyous daybreak to end the long night ofcaptivity.but one hundred years later,maplestory money we must face the tragic fact thatthe negro is still not free.maple money one hundred years later,sell wow gold the lifeof the negro is still sadly crippled by the manacles ofsegregation and the chains of discrimination. one hundred yearslater,maple story money the negro lives on a lonely island of poverty in themidst of a vast ocean of material prosperity.wow powerleveling one hundred yearslater,maple story power leveling the negro is still languishing in the corners of americansociety and finds himself an exile in his own land. so we havecome here today to dramatize wow powerleveln an appalling condition.in a ms mesos sense we have come to our nation''s capital to cash a check.when the architects of our republic wow powerleveln wrote the magnificent wordsof the constitution and the declaration of independence, theywere signing a promissory note maplestory power leveling to which every american was tofall heir. this note was a promise that all men would beguarranteed the inalienable rights of life, liberty, and thepursuit of happiness.it is obvious today that america has defaulted on thispromissory note insofar as her citizens of color are concerned.instead of honoring this sacred obligation, america has giventhe negro people a bad check which has come back markedinsufficient funds.justice is bankrupt. we refuse to believe that there areinsufficient funds in the great vaults of opportunity of thisnation. so we have come to cash this check -- a check that willgive us upon demand the riches of freedom and the security ofjustice. we have also come to this hallowed spot to remindamerica of the fierce urgency of now

very nice blog!
I was worthless until I was sold
Once you purchased me,
You made me Wow Gold.
Now everyone wants to Buy wow Gold.

remembering my last two years, the talk that Dr. Neal Gafter gave for the Java User Group CoLogne came to my mind and I agree with you it was so awesome!

So far, I managed to go though only some of the posts you have here, but I find them very interesting and informative. Just want say thank you for the information you have shared.

Monsieur Louboutin once said, "sexy is too vast to be defined, but more than anything it's an attitude much like elegance." Christian louboutin shoes is the perfect juxtaposition between sexiness and elegance. Whether you dress her up or dress her down, she will add a bit of attitude to any ensemble.
DIscount moncler uk , cheap Babyliss Hair Straightener, CHI Hair Straightener.